TOKYO — The Tokyo Olympics are well underway after a long journey filled with controversy, and an unprecedented one-year postponement because of the COVID-19 pandemic.

The proceedings officially began with the opening ceremony at the National Stadium, a mostly subdued affair mixed with joyous moments like a high-tech drone show, and capped by tennis star Naomi Osaka lighting the Olympic cauldron.

Read our breakdown of the events to watch.

Here are the latest developments:

10:40 p.m. The U.S. men’s basketball team overcomes a sluggish start to beat the Czech Republic, 119-84, to advance to quarterfinals.

7:53 p.m. Two male judokas from Georgia have been ejected from the Games for leaving the athletes village to go sightseeing in violation of COVID-19 protocols, Kyodo reports citing a spokesperson for the country’s Olympic committee. This marks the first time that participants of the Olympics have been stripped of accreditation since the Games began on July 23. 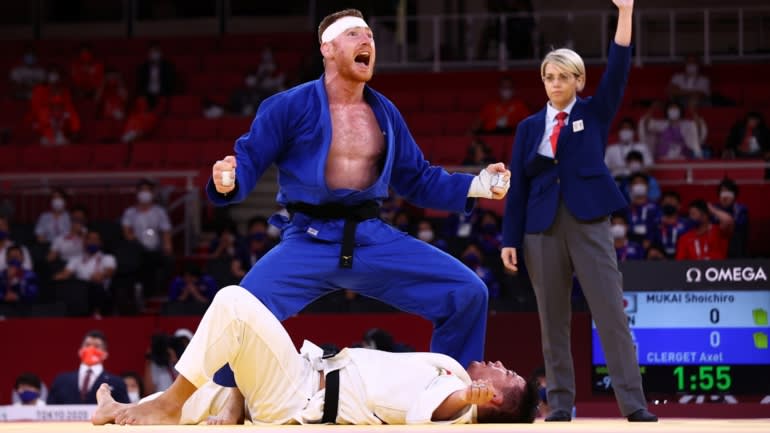 6:42 p.m. World No. 1 and 20-time Grand Slam tennis champion Novak Djokovic of Serbia will leave the Olympics without a medal for the third time straight after pulling out of Saturday’s mixed doubles final with a shoulder injury, according to an official statement from the organizer.

6:29 p.m. An unnamed Kenyan male sprinter has tested positive for a banned substance, Team Kenya said in a statement. He will be provisionally suspended and will not take part in qualifiers on Saturday.

6:05 p.m. China’s Lyu Xiaojun wins the gold medal in the men’s 81 kg weightlifting at the Tokyo Olympics on Saturday but fails to break his own world record.

3:21 p.m. The organizers of Tokyo Games say they have revoked a Games-concerned personnel’s accreditation due to violation of Playbook rules. The person in question was staying at the Olympic Village but left for sightseeing. The organizers decline to provide more detail. This is the first known breach of the whereabouts protocol since the Olympics began.

2:20 p.m. Nesthy Petecio of the Philippines beats Irma Testa of Italy in women’s featherweight boxing semi-final, clinching at least a silver medal and putting the country on the brink of its second gold medal at the Tokyo Games. Another semi-final match in the weight class is due later in the day between Japan’s Sena Irie and Karriss Artingstall of the U.K. Nesthy Petecio of the Philippines reacts after winning her fight against Irma Testa of Italy in the women’s featherweight boxing semi-final at the Tokyo 2020 Olympics on July 31.

11:20 a.m. Tokyo 2020 reports 21 new cases among Olympics concerned personnel. That brings the total number to 241 from July 1. No athletes were included in the new cases. The total number of screening tests is now more than 380,000.

10:58 a.m. Kaylee McKeown of Australia wins the gold medal in the women’s 200m backstroke. Kylie Masse of Canada won the silver and Emily Seebohm of Australia took the bronze. The U.S. eliminates the Netherlands on penalty kicks after playing to a 2-2 draw over 120 minutes. Megan Rapinoe hits the clinching shot for the Americans in a battle of medal favorites.

8:28 p.m. Japan wins the gold medal in the men’s team epee fencing competition, defeating the Russian team led by its National Olympic Committee in the final. It is the first time for Japan to grab the gold in this sport, and it brings the 17th gold medal to the host country. The tally is a new record, higher than both the 1964 Tokyo Olympics and the 2004 Athens Olympics. 7:35 p.m. Japanese Prime Minister Yoshihide Suga declares an expanded state of emergency in the capital’s neighboring prefectures, as well as Osaka. At a news conference, he stressed that people from overseas who are involved in the Olympic Games “do not have contact with the Japanese people,” adding that the events are not the cause of spreading infections. “We continue to ask people to watch the Games on TV,” Suga said.

5:05 p.m. South Korea’s An San wins the gold medal in the women’s individual archery. Reuters reports that she is the first archer to win three golds at a single Games, including team events. Fresh from their win over top-ranked France in the quarterfinals, Japan cruised to a 45-38 victory in the semis. The medal will be the third in Japan’s fencing history, and the first in the epee discipline. 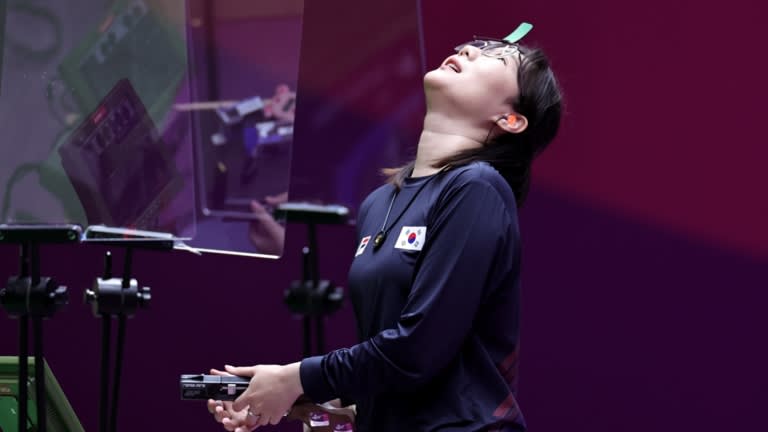 2:15 p.m. French heavyweight judoka Teddy Riner suffers a shock defeat to Tamerlan Bashaev of the Russian Olympic Committee team in the men’s judo +100 kg division, ending his gold medal hopes in the quarter-finals, Reuters reports. The 32-year-old double Olympic champion, one of the biggest names in the sport, was aiming for a third consecutive gold to match a record held by Japanese great Tadahiro Nomura.

1:45 p.m. Indian boxer Lovlina Borgohain is assured of at least a bronze medal after she defeats Chen Nien-chin of Taiwan in the quarterfinals of the women’s welterweight category. Since all semi-finalists are awarded, she is set to bring India another medal following weightlifter Mirabai Chanu’s silver in the women’s 49kg competition last Saturday. Lovlina Borgohain of India celebrates after her fight against Chen Nien-chin of Taiwan. 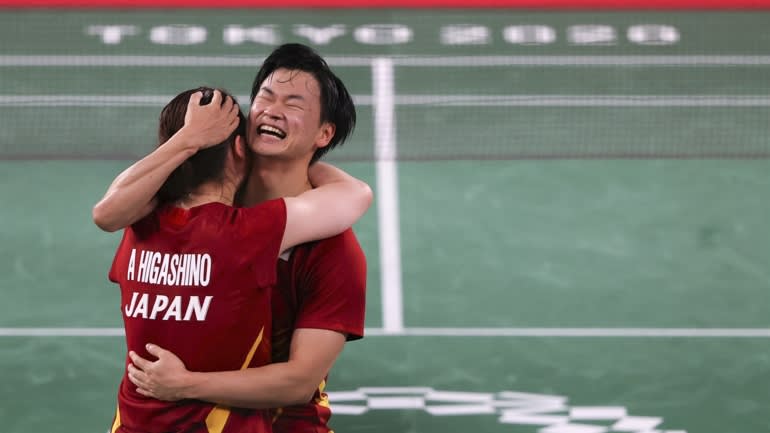 12:45 p.m. Two unnamed Australian track and field athletes and one athletics team member will be kept separate from their team for the rest of the Tokyo Olympics, after contact with infected U.S. pole vaulter Sam Kendricks, Reuters reports citing Team Australia. The Australians will be able to compete, however, as long as they test negative.

Kendricks, a double world champion, tested positive and was forced to drop out of the Games. The entire Australian athletics team then briefly went into quarantine on Thursday after the trio had a short encounter with him. The team was cleared shortly afterward.

11:35 a.m. Hong Kong’s Siobhan Haughey brings home her second medal of the Olympics after winning the silver in the women’s 100m freestyle swimming. She breaks her second Asian record this week with a time of 52:27. Hong Kong has so far bagged one gold and two silvers at the Tokyo Games — its biggest medal haul in history. Haughey also won the silver in the 200m freestyle.

In the 100m event, Emma McKeon of Australia wins the gold while compatriot Cate Campbell takes the bronze.

11:20 a.m. Tokyo 2020 on Friday reported 27 positives cases among people involved in the Games. Three of them are athletes, and two of the three reside in the Olympic Village. Total tests at airports reached 39,853 while the number of total screening tests is approaching 350,000, according to organizers.

10:30 a.m. Hong Kong police are launching an investigation into booing of China’s national anthem in a shopping mall during a broadcast of the city’s first Olympic gold medal win in 25 years earlier this week, Reuters reports.

More than 100 people gathered on Monday to watch Edgar Cheung Ka-long win the Olympic men’s individual fencing title. Police say they fielded complaints that some people booed during the award ceremony when China’s national anthem was played, according to local media. Some shouted “We are Hong Kong,” South China Morning Post reported on Friday. 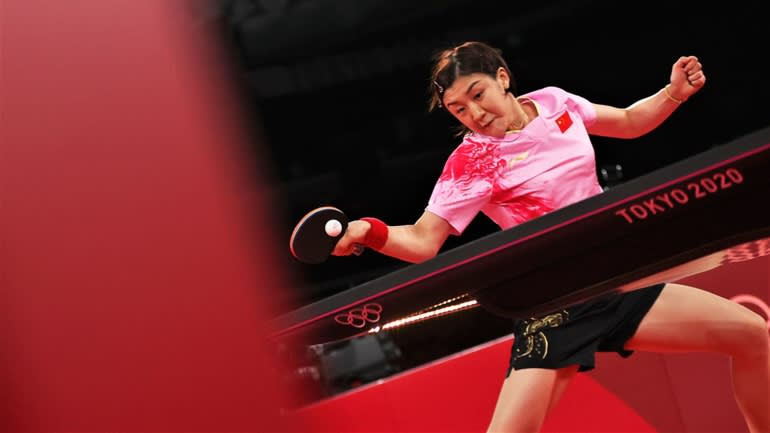 World No. 1 Chen Meng of China paddles for gold in the women’s singles final.

Lee’s family in the U.S. state of Minnesota celebrated the win with other members of the Hmong American community. Sunisa Lee of the U.S. competes on the balance beam in the women’s gymnastics individual all-around final during the Tokyo 2020 Olympic Games.

9:25 p.m. Singaporean swimmer Joseph Schooling has missed out on the 100m butterfly final, meaning he will be unable to defend the title he won at Rio 2016. “The time just didn’t reflect everything that we have done this year, sometimes that is just how it is, it is hard to digest,” Schooling tells reporters, according to Reuters. “You live to fight another day though, and I sure as hell don’t want it to end like this.” 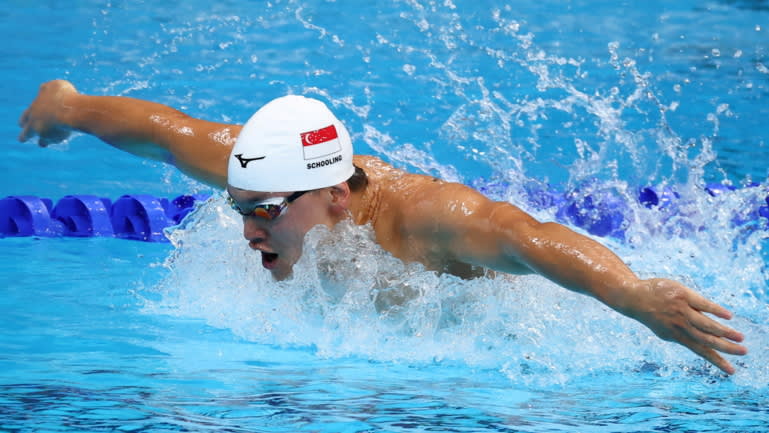 Singapore’s Joseph Schooling was unable to make it out of the 100m butterfly heats after winning gold in Rio.

7:45 p.m. Aaron Wolf of Japan wins the gold medal in the men’s -100 kg judo, beating Cho Gu-ham of South Korea in the final. This comes shortly after judoka Shori Hamada’s win for Japan on the women’s side.

7:15 p.m. Sun Yingsha beats Japan’s Mima Ito by four games to none in the semifinal of women’s singles table tennis, setting up an all-China final. The world No. 3 Sun will face top-ranked Chen Meng, who easily dispatched Singapore’s Yu Mengyu 4-0 as well. 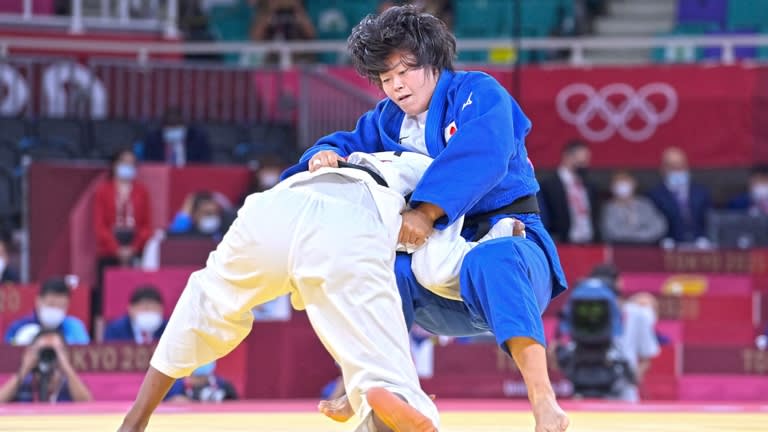 6:55 p.m. Japanese judoka Shori Hamada wins the gold medal in the women’s -78 kg category, beating Madeleine Malonga of France. Japan is up to 14 golds according to the Olympics website’s latest table.

6:30 p.m. Thailand’s Jazz Janewattananond is one shot off the lead after the opening round of the men’s golf tournament, at -7. Austria’s Sepp Straka leads the pack at -8.

Japanese medal hopeful and Masters champion Hideki Matsuyama, coming off a case of COVID-19, was six shots off the pace at -2. He said he felt the lingering effects of his illness as the day wore on, according to Reuters. “It was very difficult,” Japan’s first major winner was quoted as saying. “Towards the end, mental side and focus faded away from me. 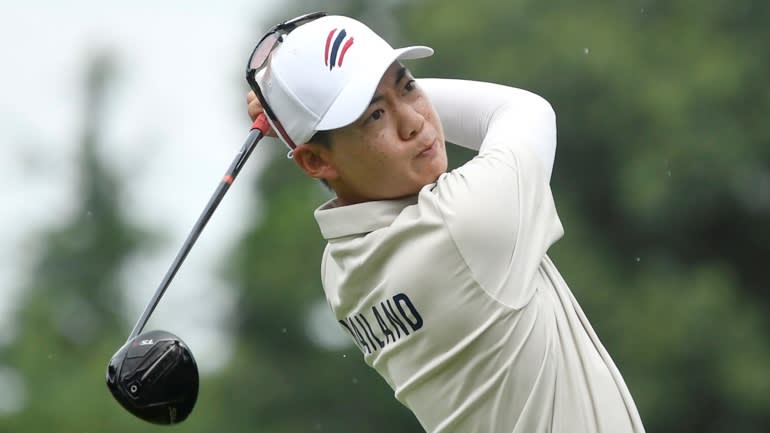 Jazz Janewattananond of Thailand competes in the first round of the men’s golf tournament.

5:00 p.m. Tokyo’s COVID-19 surge shows no signs of stopping: New cases in the city hit a record of 3,865 on Thursday, the metropolitan government announces, up from 3,177 on Wednesday.

4:25 p.m. U.S. double world champion pole vaulter Sam Kendricks and Argentina’s German Chiaraviglio have been ruled out of the Olympics after testing positive for COVID-19, Reuters reports. Members of Australia’s team, meanwhile, have been placed in isolation as a precaution.

1:35 p.m. Indonesia’s Rahmat Abdullah has taken many by surprise by winning a bronze medal in the men’s 73kg weightlifting. He had competed in a division with lower weight entries, Reuters reports, on the advice of his father and coach who said it would make him “more comfortable and relaxed.”

“I am so happy, the plan worked,” he is quoted as saying, adding that injuries forced his father to give up his Olympic dream in 2004. “Today I’ve won the medal for both of us, I dedicate this to him,” Abdullah says.

Reuters explains that weightlifting competitions comprise two sessions, Group A and Group B, on the same day. Group B sessions feature athletes who have registered lighter weights. 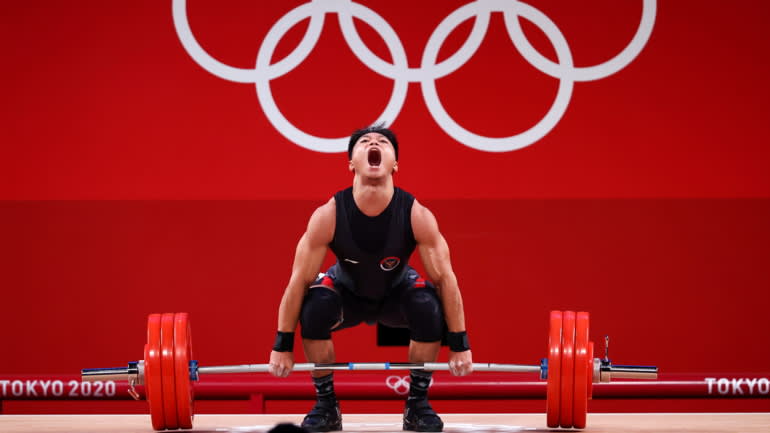 11:45 a.m. Chinese swimmer Zhang Yufei wins the gold in the women’s 200m butterfly, setting an Olympic record. Regan Smith and Hali Flickinger of the U.S. follow with silver and bronze.

11:40 a.m. Olympic organizers deny that Tokyo’s record spike in COVID-19 infections this week is due to the Games, and that Olympic infections are adding strain on Japan’s medical system. “As far as I know there are no infections spreading to the Japanese public from the Olympic movement. There is not a single severe case among our stakeholders,” says IOC spokesperson Mark Adams.

Thirty-four new Olympic-related cases were reported today, bringing the total to 193 since July 1, out of 39,000 arrivals and 310,000 tests. Two Olympic stakeholders are in hospital, according to IOC medical director Richard Budgett, but officials would not say whether they have the coronavirus. 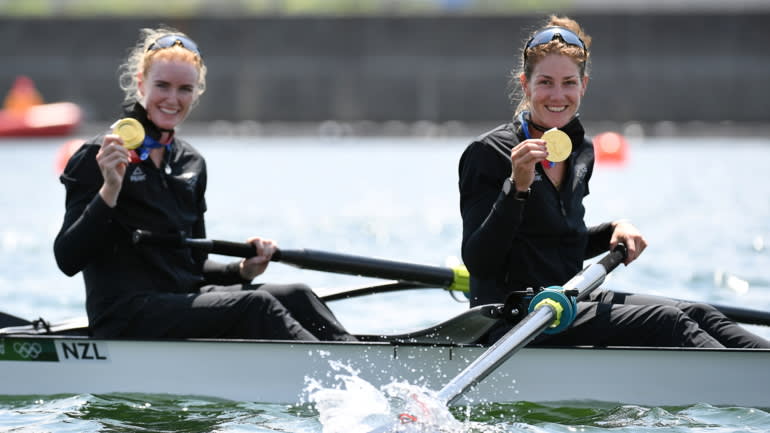 Grace Prendergast and Jackie Gowler of New Zealand celebrate in their boat with their gold medals on July 29.

To catch up on earlier developments, see the last edition of latest updates.